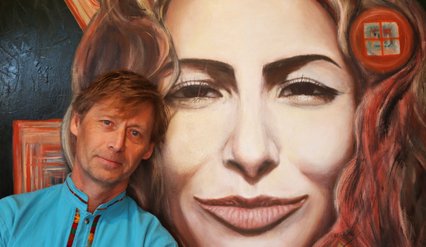 Emil Tonne Staal was born in Elsinore, Denmark. He grew up in a workers family as the youngest of 3 children. From his father who was a shipbuilder, Emil learned from an early age to use his hands, as tools to build and create things.

On Emil’s 14 years birthday he got an old guitar and that became a turning point for Emil. He learned fast to master the instrument and shortly thereafter Emil started writing his own music and within a year Emil had started his first band and began giving concerts at different gatherings and parties.

Later Emil moved to Copenhagen to join the professional music scene in the capital. Emil has since then been playing more than a thousand concerts in many countries around Europe. He’s also been touring in so faraway places as East Africa and Mexico.

In 2004 Emil returned to Denmark after living and playing music in Spain for about 1 year and that’s when Emil started to express himself through painting and sculpturing, which became a second turning point.

Instead of joining the Art academy, Emil choose to learn Art painting in the same way he’d successfully learned the art of music. He studied the great masters he admirered, made workshops and learned from other artists and simply, he made a lot of art.

Emil Tonne’s art is inspired and captured from his deep interest in intercultural communication and in people’s different spiritual perceptions and cultures around the globe, as well as our interaction with nature and animals.

Emil has worked with art in many forms, from music and poetry, over performance art and installations, to sculptures and paintings and he has a Range in his Art that is rare and ever expanding. Emil is driven by a tireless desire to explore his inner self and the world he experiences around him and on his many travels.  Emil then translates the many emotions and impressions, into stories and expressions through color and form.

In many of Emil's works, you will find layers of mystery and symbols, which originate from different world cultures and which provide an insight into Emil's own spiritual search, from sweat lodge trips in the Mexican Mountains, meditation and Buddhist philosophy,  African shamanism, to personal guidance from an Apache Medicine man.

Emil Tonne has on several occasions exhibited at galleries in Mexico and participated in art festivals and in TV and radio shows in several places in Mexico.