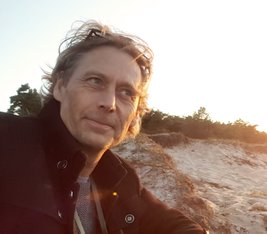 Emil Tonne Staal was born in Elsinore, Denmark. He grew up in a workers family as the youngest of 3 children. From his father who was a shipbuilder, Emil learned from an early age to use his hands, as tools to build and create things.

Emil spend a lot of his childhood in his father’s Garage, where he had almost no limits for to build all kinds of strange creations, from go-carts, human figures with wheels, to small UFO’s and other crazy inventions. Later Emil took an education as a carpenter.

On Emil’s 14 years birthday he got an old guitar and that became a turning point for Emil. He learned fast to master the instrument and shortly thereafter Emil started writing his own music and within a year Emil had started his first band and began giving concerts at different gatherings and parties.

Later Emil moved to Copenhagen to join the professional music scene in the capital. Emil has since then been playing more than a thousand concerts in many countries around Europe. He’s also been touring in so faraway places as East Africa and Mexico.

In 2004 Emil returned to Denmark after living and playing music in Spain for about 1 year and that’s when Emil started to express himself through painting and sculpturing, which became a second turning point.

Instead of joining the Art academy, Emil choose to learn Art painting in the same way he’d successfully learned the art of music. He studied the great masters, made workshops and did a lot of networking with other artists and simply, he made a lot of art.

Emil's art is released and captured, from his deep interest in intercultural communication, different spiritual perceptions and peoples interaction with nature and animals.